We played 3 more games of Modern Spearhead, all based in the mid-70s, meaning ATGWs were much less prevalent than RCLs. First up was half a Polish Division attacking a British Brigade.  The Poles were an Infantry Regiment in OT-64s, organised as three battalions (the regimental tank battalion's 3 companies having been attached out to the infantry battalions), plus a tank regiment.  The Polish tank regiment organisation at this period was highly unusual, since it consisted of 5 largish tank companies, plus various supporting elements, with no battalion-level structures. In MSH it counts as a single very large "Battalion": in this case, it was some 30 elements strong once attached assets had been factored in.

The Poles hastily attacked with 800 points against 600 of British, who were organised in 3 battalions IIRC: I not only forgot to take photos (although Rhys has some here) but also notes as well. I do remember the Wombats performing credibly, and the Chieftains being, as usual, incredibly hard to shift. But the game was something of a draw, with Polish numbers making their presence felt in several close assaults.

The second game was another where we forgot to take photos... For  change, I took command of some of Rhys' American figures, while he ran Czechoslovakians at me. I defended, and not being used to such a tiny force, added an "A" option to bring myself up to 650 points.  This still left me with only 2 battalions; neither of which was full-strength. One was however reinforced with an ACAV troop in Sheridans. These performed quite well, as they were placed behind M60A1s that drew enemy fire, meaning their weak armour was seldom tested. Rhys had the standard 2 regiments that MSH "WarPac2" nations can field on attack under Keith's scenario system: an infantry regiment organised as 3 battalions (with attached out tanks), plus a 3-battalion tank regiment. All 6 moved on-table in the first bound, as Rhys didn't like the odds of flank marching (a 6 being required). How did the battle go? Let's suffice to say that Rhys scored 1 point (a single contested objective), while I scored 15 (even after subtracting the 1-point penalty for the A option), which was commuted to 10...

For the 3rd, I finally managed to take a few pictures. I took Czechoslovakians, while Rhys took a West German force with Leopard1A3s and Marders. This amounted to 3 small battalions totalling a paltry 29 elements (28 plus an observer). Accordingly Rhys chose to sit back, covering only the 3 objectives nearest his baseline: two summit points, plus a bridge. He had no effective way to contest the summit point in front of my centre (being on a forested road), but the one to my near left (a town sector spanning a stream) was at least covered by his tanks, being in a relatively terrain-free valley.

Of my 3 tank battalions, I flank-marched one (path B on the map), while I initially kept the other two in reserve. As it turned out, they both got fired upon quite early, and had to commit themselves a bit sooner than I had planned.  My infantry regiment was tasked with the initial advance; as usual, its tank battalion was attached out to the three infantry battalions. Being a 1970s game, this attached-out tank battalion was smaller than the equivalent 1980s formation; each company being 2 MSH stands, and not 3. The central battalion had to make its way through dense forest, and thus was slowed down considerably (path "1" in the deployment map). This did mean, however, that it almost no casualties in getting into a position where it could start to assault the German centre. 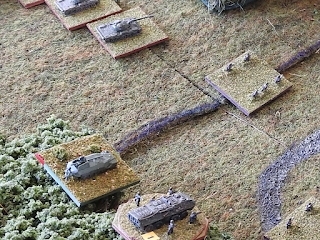 The photo to the left shows one stand of mine that I had brought out with me from Japan (the OT-810D), with the others being Rhys' own. Rhys cuts the corners off his HQ stands to make them more easily recognisable. I think I'll do this with mine too, because HQs don't shoot, and thus don't really need full-length straight edges for all base sides. I might keep the front corners, as this makes it easier to see if an armoured element is being flanked or not.  The OT-810D is a conversion from an H&R Sd.Kfz.251. It's not a very useful vehicle in an attack game, alas, since it can't do a half-move and fire like a tank can.

The battalion on my right (path "3" in the deployment map) advanced steadily, and some awkward fire angles from Rhys' perspective kept my casualties down. In contrast, the battalion on my left (path "2" in the deployment map), faced with the most open terrain, got hammered. I was hoping to catch Rhys in a pincer with my flank-marching tank battalion, but it never turned up. The "A" tank battalion was able to support it on its right, but it took too many casualties on the left, and broke. Tank battalion "A" was itself eventually broken as Rhys' battalion in the area, not seeing any flank marchers turn up, was able to move towards the centre.

Unfortunately for Rhys, elsewhere on the field, he had not been able to whittle down my forces enough to stop them moving up into positions where he could be close assaulted (although some LARS rocket fire didn't mean it was all plain-sailing for the Czeschovakians...)  In the centre, Battalion "1" was able to over-run the infantry defending the village just beyond their first objective, and a combination of artillery fire and supporting tank fire was enough keep the rearward German elements from interfering. And on the right, a dearth of German tank support meant opportunities to pick off my advancing elements couldn't be capitalised on: those Marders may be very tough for the period, but they do cost a lot of points...

On my centre-right, a wooded hill was stoutly defended by a combination of armour and Panzer Grenadiers. This was attacked head-on by my "C" tank battalion; you can spot attached some OT-62 infantry platoons in support in the photo to the right. The battle was relatively even, with my greater numbers about making up for their poorer equipment. Eventually this defending force was faced with encirclement as my "1" and "3" battalions started killing the defending elements in front of them, allowing them to manoeuvre more freely.

Although Rhys had broken two of my battalions ("2, and "A"), and left a 3rd in bad state ("C"), he was not in a good position. I had claimed more objectives than he had held, had two decent battalions left on-table compared to his one, and had another one off-table that - at some point - would eventually take his one decent from directly from behind. A clear - albeit far from bloodless - victory to the Czechoslovakians.

Email ThisBlogThis!Share to TwitterShare to FacebookShare to Pinterest
Labels: 1:300, moderns

Some blogs relevant to this site